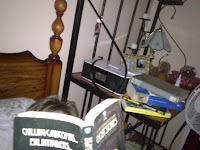 Well that’s another weekend done and dusted.  Today was wet, so I spent it reading a little bit of this and a little bit of that……...
I awoke about 8.30am this morning, after being snubbed by my cats all night despite frantic calls around 1am when I thought if I could have a least one of them on my bed I’d feel ‘safer’!!  (Damn those ghost stories).  It was to no avail however, if there’s nothing in it for them - they’re not interested.  Not wanting to get up right away I thought I’d polish off a couple more stories from the Matheson collection – Wet Straw which was a ghostly revenge story and Dance of the Dead which was set after WWIII (this one was particularly creepy).  The next one is The Children of Noah, which I’ll probably read tonight.
I breakfasted on English Muffins with ginger marmalade and a cup of coffee, and then tackled my ironing whilst listening to more of Carry Me Down.  Things have gone from bad to worse for John Egan.  His father hit the grandmother and she kicked them out of her home; though, John does not know the reason at the time and drives his parent mad with his questions.  They go to and are given a council flat on a dreary estate where John is bullied by the local gang.  John’s father gets a job in a factory and things look like they could work out but one night John smells perfume on him and accuses him of 'being dirty' with the girls in the flat upstairs. His father is drunk and he denies it, but later John tells his mother of his suspicions.  One day she acts upon them, and they are confirmed, which results in his father being asked to leave. Unfortunately being the family that they are John is made out to be the bad guy ie he should have kept his mouth shut.
John’s mother falls into a deep depression and is unable to sleep.  One day she promises she will take John to the zoo but breaks the promise.  This is just one more broken promise in a long line in John’s life.  The breaking point comes when she does finally fall asleep and John straddles her and presses a pillow to her face.  When she stops struggling, he thinks he has killed her but shows no feelings, he is just numb, but he later hears her coughing and choking. When questioned by the Guarda and a child psychologist John says he just wanted to help her sleep.  John is taken to a boy’s home, and as usual my iPod let me down and I’m now waiting for it to charge so that I can finish it!  It’s been a compulsive read, strange, but compelling because it is told from the boy’s point of view.  He’s not really a bad kid, it’s the people he’s had around him and raising him that are the real problem.
After lunch (BBQ chicken and bread rolls) I listened to some more Harry Potter and the Half -Blood Prince.  Harry’s learning some background about Tom Riddle via the Pensive with his Head Master, and he’s convinced that Malfoy is now a death-eater, although he’s yet to sway anyone else to his way of thinking.  I went onto Overdrive to see if my two holds were still available, I haven’t got much download left this month so one of them (2666) will have to be booked for another time, but I did however download The Maltese Falcon by Dashiell Hammett.  This book is on the 1001 list and has also been mentioned in a few books that I have read recently so as soon as I have finished Carry me Down that will be my next audio read.

OMG I forgot to mention my BIG news!  I was driving my other half mad last night going on and on about how great it would be to have a Kindle, that I have one on my Amazon wish list, and how I would download all those great classics ……. he was half asleep on the couch after wiping himself out with a pack of Pikelets and half a jar of jam and said if I wanted it so much why didn’t I just buy it.  So I thought there was some sense in that and said I would probably get it as a tmas present to myself.  He said just get it and it’ll be an early tmas present from him.  So I took advantage of his half comatose state and bought it!  It should arrive by the end of the month, or early October.  Woo hoo!

Email ThisBlogThis!Share to TwitterShare to FacebookShare to Pinterest
Labels: Ramblings