I wasn’t going to sit in front of the computer tonight after being glued to it at work this past week, but if I leave it any longer I’ll finish these batch of reads without having talked about them J


The Man in the by Phillip K. ck  is a Hugo Award winning novel, set in an alternate reality where and won the war.  has been divided into the Pacific States and the Reich controlled states.  has wiped out and are still exterminating the few remaining Jews. It is more tolerable to live in the Pacific States as the Japanese are more cultured and less ‘thuggish’ in their daily dealings.
The is a remote mansion, inhabited by the author of The Grasshopper Lies Heavy.  This book, which is banned in the Reich States, tells of an alternative reality where and lost the war.
I’ve almost finished listening to this, but I can’t relate to any of the characters.  I like the premise, it is well written, but I’ve enjoyed other Dick novels more (Maze of Death and Dr Blood Money especially).

Choke on the other hand I love.  You are warned at the beginning that you won’t like the protagonist – but I do!  You can’t help it.  Victor is a sex addict, who works in an 18th Century themed park, and pays his ageing mother’s hospital bills.
As his mother needs a feeding tube and the bills get higher and higher, Victor needs to bring in more money.  He does this by selecting a restaurant, and choking halfway through his meal.  He always finds a saviour who then will remember him yearly by way of an anniversary card and (usually) a nice cheque.  Victor sees this as helping other people too -  making them feel special, becoming a hero…..
Victor never knew his father, but his mother is keen to tell the story to Victor but unfortunately she does not recognise her only son even though he visits her regularly – she sees him as one of her defence lawyers from her shady past!  Victor is also the bad guy from the all the elderly patients' pasts.  He accepts all their abuse as he thinks that it makes them feel better about what happened to them, and it’s not worth arguing the point with them.
It’s a very unusual novel and very quirky.  I like the way Palahniuk sums up the previous paragraph by saying: for example: “Freedom” isn’t the right word but it’s the first word that comes to mind. 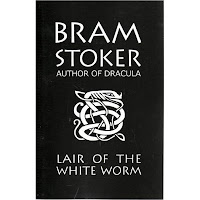 The Lair of the White Worm by Bram Stoker isn’t overly fantastic.  The writing is a little amateur.  Adam Salton has come to from to stay with his elderly uncle.  Whilst there he learns about the region they are situated in, which was known as in Roman times, and also known as the Lair of the White Worm - the worm being some monstrous snake or dragon.
There is something Lovecraftian about it, but it’s not on the same level.  I will persevere with it however.
That pretty much sums up my reading for this week.  I’ve got The Idiot by Fyodor Doestoyesdky lined up on my iPod (another 1001), though it’s only half downloaded from Overdrive, so I need to work out how to finish it off otherwise I’ll be downloading it as an EBook instead!!