Well, we have another year just about done and dusted, and I'm sure a lot of people are with me in saying that this is a year we'd be happy to say goodbye to.  As I was packing my suitcase today in preparation for my Christmas holidays I was thinking about some of the books that I have read this year.  I can't count 2011 as my best year of reading as I didn't make my challenge of 75 novels, but if you consider that my list included Melmoth The Wanderer, Anna Karenina (nearly finished), several Charles Dickens novels and The Iliad (halfway through it), I'm pretty happy with my effort overall!
2011 was the year that I discovered Haruki Murakami, firstly with the strange Wind Up Bird Chronicle and then the beautiful Kafka on the Shore.  Dance, Dance, Dance was a little disappointing but I'm waiting in anticipation to next year when I'll be reading IQ84.  It's kind of funny but when I first joined a Book Club the genre I disliked the most was Magic Realism yet I find that the more I read, the more I enjoy it.  Murakami's novels are certainly unusual, but there's something about the characters that intrigue you; especially characters like Mr Nakata in Kafka on the Shore.
2011 was the year that Earth Abides by George R Stewart was recommended to me by a fellow blogger after they read my review of Children of Men.  Isherwood Williams is a wonderful character, his love of the written word and his care of one of the last remaining libraries in his post apocalyptic world is very poignant in relation to today's e-book revolution.  The final chapter contains imagery that I don't think I will ever forget.  It's quite a novel, and probably one of the best in the genre.
2011 was the year that I became disillusioned with Michael Crawford after reading his autobiography Parcel Arrived Safely - Tied with String.  It taught me a lesson - if you admire someone then don't read about them!  He's way too full of himself and the fact that he had cheated on his wife totally finished me - I can't even watch him on TV now.  The realm of the autobiography is a dodgy one, in a way the author is re-inventing his own past for entertainment and that's not always such a good thing. There's something to be said for a little mystery when it comes to celebrities.
The highlight of 2011, for me, was meeting one of the best literary characters ever and his name was Owen Meany.  This diminutive little guy with the weasley face, big ears and high pitched voice was an unlikely hero.  But, hero he became and I just loved his outlook on life - he could not be put down, he had something to say and he said it loud and proud.  A Prayer for Owen Meany by John Irving is both funny, sad and a wonderfully put together novel. The ending is so unexpected, but the storyline had been building to just this the whole way through.  It's fantastic story telling and I totally recommend it. 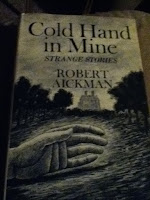 So now I'm debating do I take a real book on my holiday or do I take my Kindle? I generally don't read much when I am away but I did recently pick up Cold Hand in Mine by the master of eerie stories Robert Aickman so that may make it's way into my hand luggage.

In 2012 I hope to be dabbling into a lot of Indie Horror, and have five more spots left on my list if anyone would like me to read and review their novel.  Details can be found here:

http://caffeineandchapters.blogspot.com/2011/11/are-you-on-my-2012-reading-list.html
I'll be off the air for around three weeks, so have a safe and happy Christmas everyone and I hope you find your next favourite novel in your Christmas stockings :)
All the best
Maxine
Posted by Maxine at 10:25 PM