Through The Withering Storm by Leif Gregersen 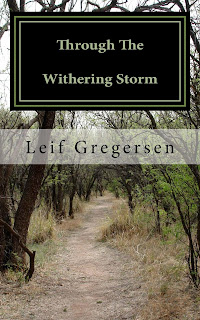 I was drawn to read this personal account of life dealing with mental illness, because I live with a man who is also diagnosed with bipolar disorder.

The brain is an amazing organ and the mind is a powerful thing, so to find yourself losing touch with reality and having compulsions that you cannot control must be very frightening indeed.

Whilst reading Through the Withering Storm I could see many similarities to stories that my partner has told me – excessive speeding around local streets in a flash car (motorbike in my partner’s case), excessive drinking and smoking, late nights and overworking, being academic but not putting the work in or, if doing the work, not doing assignments until the eleventh hour leaving no time to finish it. In fact my partner is doing this just now with a certificate in safety course he is involved in.  10pm on a Sunday night he brings out his assignment that is due in on Monday morning!

Whilst I laugh at my partner’s stories about his past ‘antics’, reading them as written by Leif has sobered me up somewhat.  The behaviour pattern is weird, off kilter and sometimes frightening, and it is definitely not funny.  The fact that Leif was unable to get the help he so desperately needed at such a difficult age, and the lack of effective parental support, is heartbreaking.

After reading the book I spoke to my partner about it, and was a bit worried that he may be annoyed that I had read it, or he may see it as me picking on him, but instead he was very interested and even opened up a little more about his own battles with his parents, his drinking (he has been sober since I have known him), run ins with the local authorities and the medical staff where he was briefly institutionalised.

I think, therefore, that this book is a brave effort at showing those who do not suffer from mental illness that beneath the bizarre behaviour a human being is desperate for help.  They want to live a stable life, hold down a job and be loved.  But, this book can also be read by those that are suffering so they can see that they are not alone, that there is light at the end of the tunnel, and that if they have been prescribed medication - KEEP ON TAKING IT!

I’d like to think that with current awareness of mental health issues treatment is not too far away once the illness has been recognised, and that patients are dealt with a bit more sympathetically than they were in the 60’s, 70’s and 80’s.

I think Leif has done a good job in setting things down, although I feel a lot was also left unsaid.  I won’t go into language and grammar, as this is not what this book is about.  It is a personal account, end of story.  Sometimes Leif’s illness does creep into the writing which serves to illustrate that although he has taken charge of it, he will never be free from it.

I wish Leif all the best for his future, and good luck with this book.

PS I forgot to mention that this book is also very heart warming in places.  The kindnesses that Leif was shown by total strangers brought tears to my eyes.