Forces are Conspiring Against Me!

It's that time of night again, and I thought I'd jot down a few thoughts before heading off to bed.

I won't write more on Ivanhoe until I actually finish it.  I've got two discs left and can only summise that we will have some momentous event by the man so that he deserved the title of the book.  I still think it should have been called Isaac the Jew, or the very least Isaac of York!!  Don't get me wrong, I Iike the character of Isaac so it's been okay reading about HIS adventures...... weird!!

I've reached the point with The Girl with the Dragon Tattoo where I really look forward to picking it up to read more.  I love that in a book, I've read too many where I put them down and forget to pick them up again (The Time Traveller's Wife....... I think that's now relegated to the bottom of my work bag!).  I'd borrowed it from the library and it was due for renewal, and unfortunately someone must have it on hold as my on line renewal was rejected. Like I said the other night, forces are conspiring against me!  I thought about hanging on to it until I'd finished and just return it late, but my conscience wouldn't allow me to do that, so I popped into KMart on my way home from work and bought a copy instead.  Actually I bought all three!  So now I can really enjoy them at my leisure, and even better the copy I have bought is a much more manageable size for reading in bed.  I nearly knocked myself out the other night as I was drifting off, the library copy was so big! 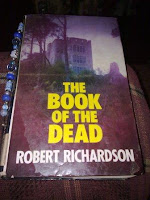 I've also started reading The Book of The Dead by Robert Richardson which is the second book for my club theme: Same Title Different Book.  Not too sure about the quality of the writing, it's more suited to a short story, but I like the premise, which is this: Gus Maltravers is a writer and amateur detective, he is a guest at a social gathering held at a gothic mansion, the home of the Carringtons.  Mr Carrington reveals that he owns an unpublished copy of a Sherlock Holmes story.  The manuscript is stolen and someone is murdered....... sounds a bit Agatha Christie-ish doesn't it?

I really need to get on with The Half Blood Prince too.  I'm been listening to it on and off, and I have been enjoying it, but I guess I'm a bit Harry Potter'd out to be honest.  I've read a few this year.  My daughter will be aghast when she reads this, but I will do my best to finish this one then have a break and read the rest next year.  I do need to prioritise my 1001 books this close to the end of the year.

My anthology containing Ringing The Changes has still not arrived, they reckon it will take six weeks - for a book???  My Kindle arrived after only 1 week - work that one out..... talking of which I still have not played with it yet.  I shall make that a priority this weekend.

Well that's me up to date, off to bed now to read some more Stieg Larsson and fall asleep to this rain (what is going on with our weather?).
Posted by Maxine at 10:53 PM

Email ThisBlogThis!Share to TwitterShare to FacebookShare to Pinterest
Labels: Ramblings