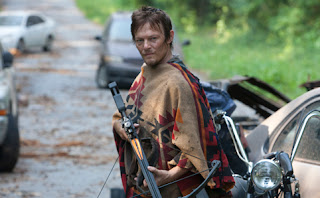 I love a well written character, don’t you?  One that you continue to think about long after you have finished the novel. For me a few of those characters have been Nick Andros from The Stand (Stephen King), Roland Deschain from the Dark Tower Series (Stephen King), John Egan from Carry Me Down (M J Hyland), Tom Ripley from The Talented Mr Ripley (Patricia Highsmith) and Owen Meany from A Prayer for Owen Meany (John Irving) amongst a few others. 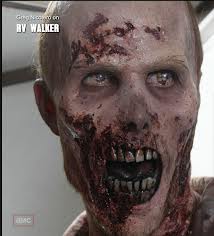 Just lately, though, it has been a TV character that has captured my imagination. I don’t watch much TV as I prefer to read, but occasionally I will borrow a TV series from the library and this month I borrowed The Walking Dead Season 2.  I enjoyed Season 1 a while back, I thought the zombies were great and overall it was a breath of fresh air compared to the banal rubbish we generally have to put up with on the box.  In Season 1 we were just getting acquainted with the start of the ‘zombie apocalypse’, but one character stood out for me: the ‘redneck’ Daryl Dixon.  Season 2 has brought Daryl to the fore, he is the best written character in the series and he is portrayed to perfection by Norman Reedus. Daryl is a hunter and tracker, he’s an angry and emotionally damaged man, but he is true and honourable and has the skills required to survive.  He’s also damned attractive when he's covered in blood and sweat, carrying that crossbow and just getting the job of zombie killing done; and I know that I’m not the only one who’s currently drooling over him judging by his fan base! 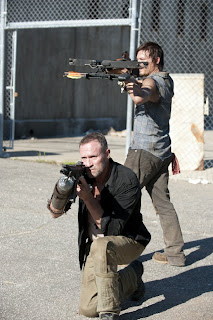 But you can’t talk about Daryl without mentioning his delightful older brother Merle.  A nasty piece of racist shit, Merle is a character you will love to hate because he is played so well by the brilliant Michael Rooker.  I’ve enjoyed Rooker’s work for quite some time and you can see that he revels in playing this charmer and the fans definitely love watching the rivalry between the two brothers.  Merle is a character from the graphic novels, yet Daryl is not, and I find it interesting that Daryl is the most rounded of the characters in the TV series to date. 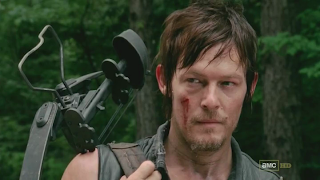 I haven’t read the graphic novels yet nor watched Season 3, though I intend to, and  I admit it's not always the best writing, plotting or dialogue -  you do find yourself yelling at the characters for some of the dumb things they do and the bad decisions they make.  But it is compulsive viewing - the zombie make up is fantastic, and I have found that there are some really haunting images that actually touch me.  Season 1, Episode 1, when Rick (played by Andrew Lincoln) comes across a female zombie head and torso dragging itself across a park, he watches it for a while and with great sorrow he says something like “I’m so sorry this happened to you”, and that for me was a really poignant moment.  Season 2, Episode 10 (“18 Miles Out”), when Shane (played by Jon Bernthal) and Rick take a minor character away from the farm where they have holed up we are given the image of a lone zombie in a suit slowly making its way through a golden field.  After the guys have had their punch up over Rick’s wife and killed a few zombies they drive back to the farm and we are shown the image of Shane, battered and bruised and lost in thought, watching that same zombie still making its way through the field.  The feeling I got was of utter loneliness – for Shane, for the zombie and for the future of mankind – it really was very well done. 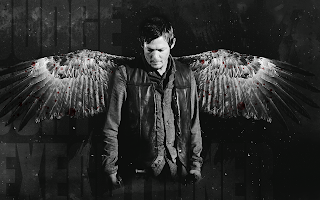 It’s strange to feel passionate about zombie fiction, when I embrace 19th Century Literature, but I hope that the Walking Dead continues to fire my imagination.  The writers are merciless when it comes to axing a character I've noticed, so I hope that Daryl Dixon’s character continues in the series because he’s the reason why I will continue to watch it.

Maxine
Posted by Maxine at 7:37 PM