What's With The Well? 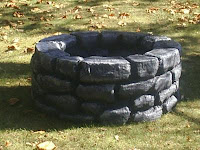 Obviously the imagery of the dry well in the Wind-Up Bird Chronicle is of some significance.  Perhaps you need to be in this confined space to be able to see things clearly?  Lieutenant Mamiya, the old soldier had spoken of the time that he had to jump into a well (the alternative was being shot in the head) and whilst lying on the dirt floor he was aware of how many stars there were in the sky and that he could see them even in the day time.  He was also aware of a dark form in the well with him, he would catch a glimpse when the suns rays hit the well but he could never make out what it was as the rays would move before it became fully formed.
When Toru had been looking for his cat with a young girl who lives nearby called May (my favourite character) she showed him a dry well in the garden of an abandoned house.  This house has a shady history which may have some relevance too.  Toru feels the need to be totally alone when he’s told by his brother, and the strange psychic Malta Kano, that his wife has left him so he packs up a rope ladder and descends into the well.  He notices that Mr Myami was right – you can see the stars in daylight.  He also has strange and disturbing dreams as he lies down there, one of them is a meeting with the woman who first rang him, though he still cannot place who she is and how she knows him.  He also has an erotic dream about ’s sister Creta who seems to be dressed as his wife.
May is a great character she’s 15 and asks some really profound questions, and seems obsessed with death but her manner is very light-hearted.  She thinks ‘Mr Wind-Up Bird’ is ‘really weird sometimes’ and when she realises that he is down the well, she steals his rope ladder during the night and in the morning tells him that he could probably live for three weeks as long as he has water.  When he tells her he only has one bottle she tells him to take tiny sips.  She wants to know what he is doing down there, and he says he needed to think.  To help him think a bit better she closes the lid to the well leaving him in absolute darkness.  She’s very cheeky but I think possibly dangerous (?) - I’m not sure how this sequence is going to go!
Whilst Toru does his thinking we find out more about him, his student days and how he met Kumiko.  Toru doesn’t seem to have a dominant character; he certainly hasn’t really exerted himself over the many women who seem to have appeared into his life since his cat went missing.  He is as boring as his seemingly mundane life……………
Posted by Maxine at 7:50 PM