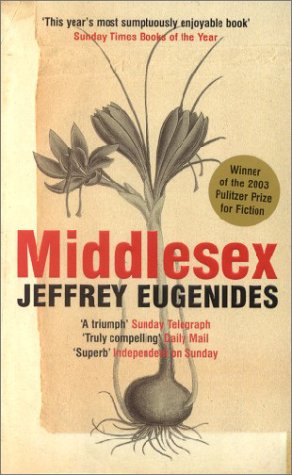 Not content with the emotional impact, nor the anatomical insight, contained in a diary written by an intersex convent girl in the 19th Century Jeffrey Eugenides decided to write a novel instead that would satisfy the reader's inquiring mind.

Middlesex is loosely based on the author's life and his own Greek heritage, however, Calliope/Cal (the protagonist) is his own creation and therefore the novel is not autobiographical.

I loved this book!!  Not only does it explore the themes of nature vs nurture, rebirth and the impact of a recessive gene on three generations of one family, but it also chronicles the life of two immigrant silkworm farmers from their isolated hillside home in Greece to their new life in prohibition era Detroit.

Calliope, their grand-daughter is born a hermaphrodite; however this is not discovered until she/he reaches puberty.  Told retrospectively, and commencing from the womb, Calliope takes us back to when her grandparents were young and how the recessive gene which is quite often found in isolated in-bred groups of people begins to rear its ugly head.

Really, this novel could have been distasteful however we are introduced to a wonderful group of characters with great personalities and eccentricities trying to make a success of their life in a new country, not knowing that their life choices are taking them down a road that will cause the teenage Calliope untold anguish.  Calliope suffers from the usual female teenage angst..... when will her period start?  Why is she so flat chested when her classmates are developing?  Why does she have a crush on her best friend?  Being of Greek heritage other tell tale signs are missed as she grows older .... the unwanted hair on her upper lip that needs waxing, the husky voice and the beginning of heavy set features.  I truly felt for Calliope as she brought back memories of my own insecurities as an introverted teenager.

One thing I didn't get was why Calliope's brother was called Chapter Eleven.  All the way through the novel I was hoping it would reveal itself.  It does actually, but very subtly and being Australian I didn't pick up on it.  American's would get it.  I won't spoil it here, read the book and if you are still in the dark you can Google Eugenides' answer.  It's quite clever.

Maxine
Posted by Maxine at 8:57 PM