From floods to cyclones in and massive storms in , the news has been like watching a disaster movie.  You know the ones, where they have the screens in the streets and the local inhabitants crowd around in horror as they watch major calamities unfold such as earthquakes, snow storms, asteroids etc  I think back to some of those early sci fi movies and some were very portentous.  Look at A Clockwork Orange – aren’t we living is such violent times?  Look at The Running Man by Stephen King – now that story showed enormous foresight (as well as The Long Walk) as there weren’t too many reality shows back then when that was written.
One of my favourite Sci Fi’s is actually Starship Troopers!  The Robert Heinlein novel doesn’t bare much resemblance and I really struggled with it but the movie is a delight.  It does ‘corny’ so well, and the ‘bugs’ are brilliant.  Another Sci Fi I really love is Silent Running but I usually end up in tears over that one because of the ‘droids – I’m too sensitive. Alien and Aliens are a must on any DVD shelf, along with Predator and more recently Avatar.  But, it’s those movies that are set on Earth that are probably worth seeing again to see how we are living today – and maybe take in some of the warnings – The Day The Earth Stood Still would be a good place to start and maybe Soylent Green?! 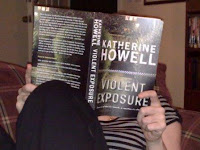 However, all of the above has absolutely nothing to do with my current reading!  I’ve just started Violent Exposure by Katherine Howell as she will be talking to my book club this month.  I have not read anything by her before, and generally I don’t read much in the crime genre so I wasn’t sure what I would think of this.  I’m about 70 pages in and can honestly say it has hooked me.  I like the short snappy sentences; the descriptions are to the point with no messing around, and it feels like real life. We get the hook right away, and now the intrigue is to slowly unravel. 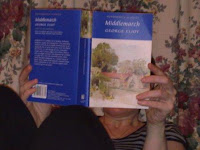 My audio read is now Middlemarch by George Eliot.  I had started reading this as a physical book last year, read about 200 pages and then couldn’t renew it at the library.  I bought a copy but I keep slipping it under the next book on the pile next to my bed.  The only way to do it justice and read it was to download.  At the moment we are getting to know the inhabitants of Middlemarch.  Dorothea and Celia Brooke are two young ladies who live with their amiable uncle.  Dorothea has been proposed to by the much older dried up Mr Casaubon who may one day become a bishop.  Dorothea is old fashioned in her ways, rather condescending to her sister and those she dislikes, but she does want to do good for those less fortunate than herself. She feels that she can be a good wife for Casaubon, not wanting a man of her own age.  The Vincy’s are a manufacturing family and their son Fred is a likeable young man but idle and prone to build up debts with promises to pay based on his hoped for inheritance from his Uncle Featherstone.  He is in love with his childhood friend the plain Mary Garth but she does not respect him because of his ways and has refused his offer of marriage.  Lydgate, the medical man, is new to Middlemarch and will obviously provide a love interest, maybe to Fred’s sister the beautiful Rosamond.  Virginia Woolfe called this novel ‘one of the few English novels written for grown-up people’. I love these long novels, where the characters unfold and you get involved in their lives.
I’m still ploughing through Melmoth the Wanderer.  The Spaniard’s story is a little convoluted and I guess it will come to the point but it has been interesting. However, I won’t bore you with it here J
I’m taking a rest from Jules Verne, but only briefly.  I enjoyed Around The World in 80 Days and Journey to the Centre of the Earth so much I absolutely must read some more soon.
Posted by Maxine at 9:20 PM