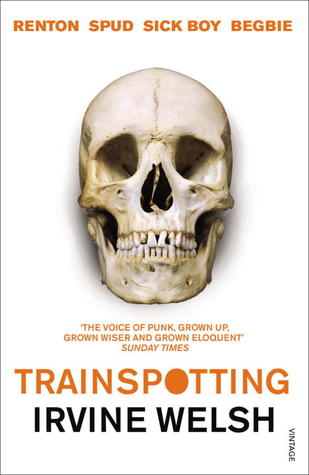 Never before have I resented being immersed in the world of a novel! I did not look forward to one minute spent with the characters in Trainspotting – yet I could not put it down.

Written in the Scottish vernacular I initially found it very difficult to read, yet I soon realised that this was the only way this book could have been written.  I soon got into the swing of it though, and when I wasn't reading it I could still hear the characters in my head, and even found myself thinking in the dialect!

Narrated by way of various short stories by the various characters, I wasn't always sure who I was reading about.  The foul language is very in your face, and the ‘Junkie Dilemma’s’ at times were excruciatingly disgusting.  The most confronting story for me was ‘Bad Blood’.  It is a revenge story, where one of the characters takes revenge on another character who is responsible for his HIV diagnosis. I found it deeply disturbing and even when the twist was revealed at the end, it had gone too far to redeem itself for me.

I can quite honestly say that I did not like this novel at all, but it is the quality of the writing itself that keeps you reading.  It’s all so very real, and it takes a talented writer to make it so.

If you saw the movie version and liked it, it won’t guarantee that you will like the novel.  The movie shows some humanity and humour in the characters, and although there is plenty of black humour in this novel, I could barely find a hint of humanity in it.  A junkie is a junkie, nothing else matters to them except for the next hit.

What a waste of a life.

Maxine
Posted by Maxine at 9:39 PM