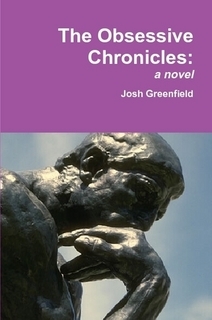 Told in the first person, this story chronicles the journey of Jordan Fineman from a seemingly normal American Jewish teenager to a very troubled dis-functional young man.

Jordan's journey opens on a trip to Alaska where he finds seasonal work whilst taking a break from his studies, we then follow him back to New York where he experiences a mental breakdown and spends some time in a psychiatric hospital.

Jordan is bi-polar, and an obsessive compulsive, but he also has a  major problem with rage.  His rages create a drug like induced state where he can't think coherently.  Human to human contact is unbearable and, despite his obvious intelligence, he finds himself unable to hold down a job. Behind the scenes is a very supportive father - emotionally and financially - and a psychiatric doctor who he sees three times a week for many years.  Yet, despite this support, Jordan has great difficulty in trying to make sense of his place in the world, and to unscramble the messages that it sends to his brain.

I did find this story interesting, if not a little disjointed, and as an outsider to mental illness it gave me an insight into OCD and just how debilitating it can be. But, I think the author had difficulty in fully conveying the actual problems 'Jordan' was trying to work through - ie we are told about his rages but never really shown.  We have some examples of his OCD but it is never fully expanded upon.  We are told that these would not be explained in depth, but I think the reader needs this to be able to reconcile Jordan's subsequent behaviour patterns.

This is my second read in as many months on mental illness, and I did see some parallels in both  stories - for one thing, things get much worse before they get better especially when the sufferer's go off their medication.

I thought the opening of this novel was very well written, but as the story progressed the writing seemed to suffer. I think that there would be some benefit from further editing/proof reading as, for me, there were an unacceptable amount of spelling and grammatical errors.


In you are interested in more information about this novel please visit: