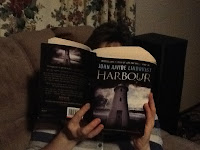 I don’t even know how to begin to review this novel because, for me, it was a complete mess of a story.

Set in , the basic premise is that the protagonist Anders and his wife take their daughter Maja out across the ice to visit a lighthouse where she inexplicably disappears.  After a period of mourning Anders returns to the family home on the to find some answers, and a series of bizarre and deadly events occur.

One of the sub stories relates to Ander’s Grandmother Anna-Greta and her long term partner Simon.  I quite liked the character of Simon, an elderly magician, and his bizarre pact with an insect known as ‘Spiritus’ that enables him to manipulate water.  Anna-Greta and a few other islanders hide a centuries old secret which relates to the disappearance of Maja and over time all is revealed.  However, Lindqvist spends too much time on the story of Anna-Greta’s relationship with Simon to the point that it just draws the novel out to be much longer than it needs to be.

The theme of the evil sea, and the ancient steps leading down into the ocean brought to mind Lovecraft’s ‘Old Ones’, but really in the end I couldn’t make sense of the ‘why’ of what was happening to the islanders.  The novel just jumped all over the place and half the time I didn’t know if I was reading about Anders or about Simon, or if it was the past or the present, because there were too many back stories.

There were some horror elements that did work, Björn and Henrik were two creepy characters and the writing was ok (although it is a translated novel) and whilst I understood that Anders was mourning the loss of his child, I found his voice to be too whining, and I wanted him to pull himself together rather than hitting the bottle all the time; I couldn’t find the sympathy for him that I found for some of the characters in Handling the Undead.

This is my second Lindqvist novel and I think Handling the Undead is much better although I was disappointed with that one too.  I obviously need to read Let the Right One In for which the author is really well known.

Maxine
Posted by Maxine at 6:53 PM

Email ThisBlogThis!Share to TwitterShare to FacebookShare to Pinterest
Labels: Handling The Undead, Harbour, Horror, John Ajvide Lindqvist, Let the Right One In