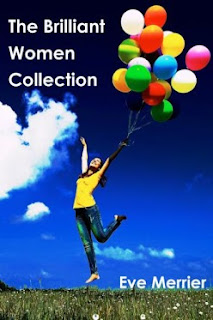 I thoroughly enjoyed reading this quirky little book by Eve Merrier.  This is a personal collection of those women who have inspired the author along with some simple facts and figures relating to the disparity between men and women in the working arena, along with a nice injection of humour in the commentary.  Eve's role models "don’t stand behind anyone: they are next to their partners as equals or they are way out ahead, showing them how it’s done.”

Those inspiring women through the ages include activists, inventors and philosophers along with well known figures such as Michelle Obama, Hillary Clinton and our very own Julia Gillard (whose popularity certainly increased after 'that speech' fired at the opposition leader Tony Abbott).

I must admit that I had not heard of many of the women within this collection, but it was certainly interesting to see how hard it has been, how far we have come and how far we have yet to go.  It got me thinking of the women who I find inspiring and amongst them I found my own sister who has battled for recognition within her field of research at an English University and who was constantly passed over for promotion in favour of (less qualified?) males.  She never gave up though and has since received the recognition she deserves.

This book could have had a heavy feminist tone, but it does not.  It is simply a celebration of those unselfish women who have forged ahead in their chosen field and raised awareness of women's issues in the process.  The consistent message in this book is: 'be yourself' and 'never give up'.