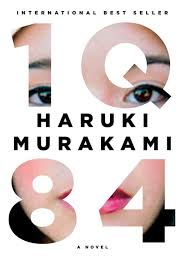 Two moons, little people, a cat town, an 'Air Chrysalis' and parallel story-lines that merge at the end.  Sounds surreal and mystical doesn't it, and just my type of read from an author I usually enjoy.  I didn't expect to be so wrong!  This love story between Aomame, a cold blooded assassin, and Tengo, a ghost writer, could have been intriguing but instead it was distasteful, boring and extremely repetitive.
I had several problems with the writing which totally frustrated me.  For one, I couldn't understand why there was such an in depth description as to the type of head a man must have for Aomame to sleep with him.  This was a ridiculous story-line to begin with, but being constantly told that it must be a certain shape and slightly balding didn't make sense as Tengo, her supposed soul mate, clearly did not have this head type at all, so what was the point?

When we were first introduced to Tengo he was in the grip of a disturbing vision/memory of his mother. These visions stop him completely in his tracks, he cannot function, and we are told in great detail that this happens on a regular basis (a bit like me and my BPPV!).  Yet it is barely alluded to for the rest of the novel.

There were in depth histories of several secondary characters which served no purpose to the story, and sequences involving a ghostly NHK fee collector who we must suppose is Tengo's comatose father which also served no real purpose whatsoever.

I did enjoy the character of Ushikawa, but the amount of time spent with him was wasted as he was killed off. I didn't get it, why did I have to spend so much time with this secondary character and learn about his past, his flaws and hear his inner thoughts, only to have him die and achieving nothing in the way of propelling the story in any meaningful way?

My biggest gripe though is the fact that there was way too much repetition over-all in the novel, especially the constant recapping of the story thus far and dumb explanations of what was going on by various characters so much so that I found it pretty insulting to me as the reader.

I was so hoping for something magical like Kafka on the Shore, but this novel could have easily been cut by a third and I think we should demand a re-write – especially that of Aomame’s character, dialogue and motivation as that side of the novel was just plain awful.