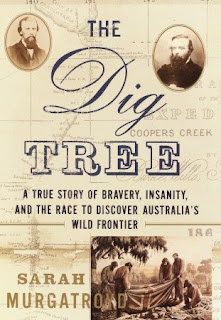 Never has my imagination been so captivated reading a novel as it has been reading The Dig Tree.

Living in Australia I had of course heard of the names of Burke and Wills, I mean there is a Burke and Wills Hotel in Toowoomba!  I knew that they had been ill fated explorers in the 1800's but that was about it.

Finishing The Dig Tree today after hardly being able to put it down, I marvel at those early Europeans who risked their lives in pursuit of knowledge of Australia's interior.

The expedition lead by Burke, and his second Wills, was mismanaged from it's conception, to the returning of their bodies for burial.  Burke was only chosen because he happened to be a 'gentleman' (albeit an Irish one), and that was of prime importance for the Exploration Committee, it didn't matter that Burke couldn't even find his way home after a night at the pub.

Sarah Murgatroyd has written a very compelling story from start to finish, giving an incredible insight into what drove those men and how it all went horribly wrong.  When Burke and Wills left Melbourne, their supplies included an oak dining table and a bath tub!  Aboriginals they met along the way brought gifts of food, but the explorers deemed them a nuisance as they wanted gifts in return from their supplies - knives, oilcloth etc  On the return trip from the Gulf of Carpentaria Burke finally succeeded in scaring the natives off completely, and it was then that he and his remaining men realised the folly - they had to discard the supplies that could have been traded for food because they were too weak to carry them - and finally all but one starved to death surrounded by the bush food they did not know how to prepare properly.

Other explorers of the outback are mentioned in the novel too as this had been a race between the Australian colonies in the hope of opening up the interior for the Telegraph and claiming it for their own.  Names like the Stuart Highway, Leichhardt, Mitchell and Julia Creek all now have a special meaning to me, they will no longer be just the names of places where I freight our company's products.

This novel also gives you a reality check as to what the Europeans did to the Aboriginal tribes in Australia and how they suffered the loss of their native land to the white intruders.  You can't change the past but they were treated very badly indeed.

Coming from England I do feel the lack of real 'history' here compared to Europe, but having now read The Dig Tree I can appreciate that Australian's colonial history may only be recent, but it can be utterly fascinating.

Maxine
Posted by Maxine at 7:47 PM