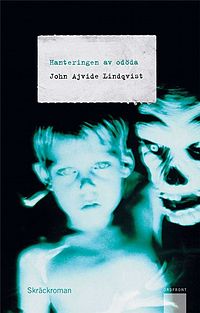 That is how I feel after reading Handling the Undead by John Ajvide Lindqvist.

The first half of this novel was so promising that I could not not put it down, it was creepy and disturbing.  I felt excited that I had finally found an unnerving book.  But then it dwindled to something boring, and finally ended up feeling like a bit of feel good fluff.

The premise was initially interesting - a strange weather event in Sweden results in the re-animation of the recently deceased.  The powers that be try to handle the situation as best they can by rounding up the dead (which they later term as the 're-living') and taking them to local hospitals, and digging up the more recently buried.

The novel follows three families - Flora & Elvy, David & Magnus and Gustav & Anna.  They have each lost someone they love, Flora her grandfather (Elvy's husband), David his wife (Magnus' mother) and Gustav his grandson (Anna's son).  Basically the novel then explores the feelings each experiences coming to terms with the 're-living'.

By far the best storyline was that of Gustav (Mahler), Anna and Elias. Gustav is grossly overweight and constantly locks horns with his grieving daughter Anna.  Anna's young son Elias tragically died in a balcony fall, but when the strange event occurs Mahler races to the cemetery and digs Elias up (a bit 'Pet Semetary' you might think, I thought so too but it was not the case as it turned out). The weather has been very hot and dry so Elias has not begun to decompose, he is however mummified and full of decomposing gas.  The description of this mummified child being taken care of with lotions for his skin, and saline which he will swallow from a baby's bottle whilst not moving nor being able see through his dead eyes, is truly nightmare material.  It is tremendously creepy.

I 'got' that Lindqvist wanted to explore the emotional side of a 'zombie' event but it got too airy fairy towards the end especially the Flora & Elvy storyline.  The supposed proof of a soul and life on the other side didn't really work for me.  (After reading The God Delusion can you blame me?) I really think that it would have worked best as an out and out horror.  I didn't need flesh eating zombies, the 're-living' that he presents are creepy enough, but I would have liked to have seen more exploration of the other types of re-living such as those that had been recently drowned.  Anna encounters one and it is quite frightening at first but then that falls flat too.

However, with this said, I think I will read more of Lindqvist's work as he is very readable and the ideas are definitely there.

Maxine
Posted by Maxine at 8:28 PM