Everyone Loves a Winner!

Earlier this year I won a $150 visa card through Paws and Purrs for doing a pet food survey on my pesky cat's eating habits, and a couple of months ago I won $1200 on lotto which I timed perfectly with the arrival of my rates and water bills LOL!

Last week I won a book pack thanks to a competition run by Houghton Mifflin Harcourt and the books arrived today.  I'm quite excited by these reads: 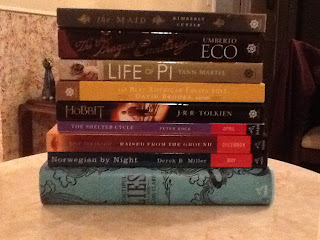 Beautiful Lies by Clare Clark, an historical novel inspired by the true story of a British politician's wife who lived a double life for decades.

Raised from the Ground by Jose Saramago.  This novel was published in 1980 but this English translation is not due for publication until Dec 4.  I have an advanced copy woo hoo!!

The Shelter Cycle by Peter Rock, due for publication April 2013 a haunting novel inspired by true events based around two children who grew up in a religion that believed the world would end in the late 1980s.


Norwegian by Night by Derek B. Miller a humorous thriller set in Norway with apparently an unforgettable hero. Another advanced copy, due for publication May 2013. I think I might read this one first.

The Hobbit by JRR Tolkien - I have read this, but it is a movie tie in edition so I will probably read it again.  I love the cover. 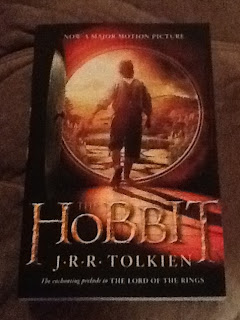 Life of Pi by Yann Martel - again, I have read this novel and absolutely can't wait to see the movie.  This is the tie in edition, and once I have seen the movie I will read it again.

The Best American Essays edited by David Brooks.  I love reading essays, and am looking forward to this one.

The Prague Cemetery by Umberto Eco.  I have read one other Eco novel and whilst it was hard going I did like it.  I hope this one is easier to read but the premise is very interesting, and it is set in my favourite period - 19th Century Europe.

and last but not least:

Maid by Kimberly Cutter - a fictional treatment of the Joan of Arc legend....... cool, sounds interesting.


Sadly though, despite the fact that I feel really lucky lately I did not have a win on today's Melbourne Cup.  Still it was GREAT to see Australia's favourite race won by an Australian Horse. Congratulations Green Moon!!

But, keep your fingers crossed for me, I have a ticket in tonight's $100 million lotto draw that's about to be drawn any minute!

Maxine
Posted by Maxine at 7:59 PM