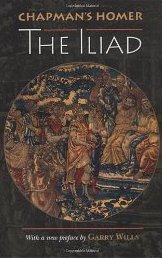 I cannot describe the sense of achievement that I feel at having completed The Iliad today after several studious months.

The title The Iliad actually means ‘What Happened at Ilion’, Ilion being the capital of .  The Greeks and the Trojans have been battling it out for the past ten years, and The Iliad is set in the final year.

There are plenty of boring references to who is fighting, who is killed and who they are the son of and various family histories, but the story itself is quite amazing.  I loved the references to the gods, and how they interfere. I enjoyed Nestor who is a legend in his own lunch box, and the overall tale of the doomed Achilles and how his pride results in the death of his friend Patroclus.

I could not have read this and enjoyed it as much as I did if it hadn't been for the Shmoop Study Guide.  It takes you point by point, book by book (there are 24 books to The Iliad) so that you have a full understanding of the meaning being portrayed in the poem, but it does so in a light hearted manner which makes it a great fun read on it’s own.

I read the translation by George Chapman, and whilst it was hard going once I found the rhythm of the poem and got to know the characters and the gods I found it hugely enjoyable.

Next year I’m going to tackle The Odyssey.