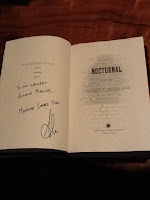 Well, here it is!  My inscribed copy of Scott Sigler's Nocturnal.

I was surprised actually to receive it so quickly (a couple of week's ago in fact) from Borderland Books in San Francisco, which begs the question: when I order a book from Amazon why do I have to wait up to two months to receive it??

I haven't had time to really sit down and read it yet, so the review will come later, but I'm 146 pages in and enjoying what I have read so far. But, I do have to admit I'm kind of missing the fact that I'm not listening to Scott's terrible voice characterisations that made Infected and Contagious so much fun for me. 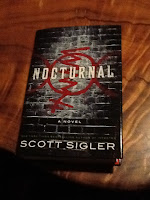 The reason why I haven't been reading much is after attempting to read Michael River's Black Witch and not succeeding due to the usual indie editing and grammatical errors, writing style and bad dialogue, I started to think that if these independent writers can create a following and have people recommending them with work as ordinary as this, then why don't I give it a go?

I've got an idea for a novella, it's pretty original and quirky I think, I've even plotted it out quite well.  Now, all I have to do is write the damn thing, but I'm stumped.  I just cannot find the right narrative voice. I've been playing around with various perspectives and not liking any of them.  I want to write what I love to read - Robert Aickman style - but it's not working.  I've tried writing dialogue for a couple of key scenes - it's coming out extremely banal.  I'm worse than the writers I'm criticising and struggling to read!! Talk about feeling shattered.

But, Rome wasn't built in a day and Catch 22 wasn't written in a year.  I will persevere gradually and I guess one day, though I may struggle like Joseph Grand, I will come up with a decent opening line and it should all flow on from there.  One thing is for sure though, I'm not a natural! Another thing's for sure, I'm still not going to bother finishing Black Witch LOL.
Posted by Maxine at 5:30 PM