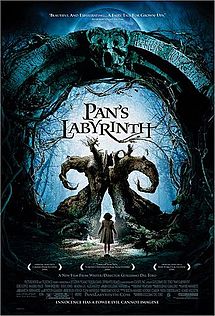 I must be getting softer as I get older!  I watched Pan's Labyrinth on Saturday night, a movie that has always been amongst my favourites, but I found that this time it was very hard to watch.  I had forgotten just how brutal some of the scenes were, I had only really remembered the fantasy sequences.
Pan's Labyrinth is directed by Guillermo Del Toro, and it is beautifully shot, superbly acted and the special effects are excellent.  The Spanish certainly know how to make good movies - Abre Los Ojos (Open Your Eyes) being another of my favourites.  Though, I believe Del Toro himself is Mexican.
Pan's Labyrinth is a fairy tale for adults, with both dark fantasy and the brutality of war to contend with.  The story centres around Ofelia, a young girl who travels with her pregnant mother to a mill where her fascist step father is stationed during the war in 1944.  A day dreamer, Ofelia believes that a stick insect she finds is in fact a fairy, and it leads her to a nearby Labyrinth where she meets Pan. Pan informs her that she is a princess whose real father is awaiting her return, but she must pass several tests in order to return 'home'.   The test where she must walk past a table laden with food and not be tempted whilst a diabolical monster sits at the head of the table motionless is quite horrible!  But, it was the sequences that were set in reality that, for me, were the hardest to deal with.
I have always been a fan of the sad ending in a movie (I loved the ending to The Mist) and Pan's Labyrinth's bitter sweet ending is perfect even though this time around it had me in tears!
Guillermo Del Toro has also co-authored a vampire trilogy, The Strain being the first of the these.  I quite enjoyed this book, as far as vampire novels go, though I think the genre has been done to death; but I have bought The Fall (the second one) to read at some stage.

It's been a bit difficult getting back into the 'groove' as far as reading is concerned as I'm still in holiday mode (even though I've been back to work for a week).  I've just finished an audio recording of The Day of The Triffids, which I enjoyed and I'm halfway through The Phantom of the Opera.  I've been reading Cold Hand in Mine by Robert Aickman on and off, it's a collection of short unsettling stories and so far they've been reaching the spot.

So, until next time, all the best and happy reading!
Maxine
Posted by Maxine at 8:09 PM