"Of All My Books I Like This The Best" 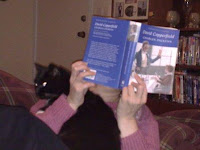 Actually, after finishing this novel, I’m close to thinking that instead of ploughing through 1001 Books You Must Read Before you Die perhaps I should just read everything Charles Dickens has ever written, because he is well and truly a master story teller and so far (apart from Bleak House) I have thoroughly enjoyed what I have read.

When I started David Copperfield I was worried that I would be reading a story about a little destitute boy who battles through trials and tribulations to become a gentleman, and I was very anxious as to what those trials would be because he is such a nice little boy.  Well, it wasn’t like that.  Sure he has a rough ‘trot’ (pardon the pun, you won’t appreciate that one if you’ve not read David Copperfield!) but that does not constitute the whole book and that is what makes it so enjoyable.  When David goes to a questionable school I was imagining all types of beatings and bullying but in fact he meets a school master who does his best under very trying conditions, and he makes friends with two boys (Traddles and Steerforth) who will play very different roles in his life when he is older.

Mr Murdstone (David’s step-father) and Miss Murdstone the 'steely' sister are very dark moody characters that cast such a gloom over the once happy family that just about breaks your heart.  You can really feel David’s nerves when he tries to do his lessons under the dark glare of his step-father and it’s no wonder he stumbles and forgets.  David’s mother is not allowed to show him any affection and after an altercation with Mr Murdstone he is sent away to school; then, when she dies, he is pulled out of school and sent to work, he was only a small child!

One thing I could not understand as David got older was what this intelligent young man saw in Dora Spendlow, the daughter of his employer, until I read somewhere that she was based on Dickens’ own mother.  He calls her his ‘child-wife’ and that really is what she is.  She’s very pretty but has no concept of house-keeping or doing figures and just likes to play with her dog Jip and can’t bear to be grumbled at or found fault with.  Once David accepts her for what she is and stops trying to change her he finds himself more settled in his marriage although the marriage is short lived.  David’s excuse for his choice in a wife is his 'young undisciplined heart', even Dora towards the end of her illness agreed that they should have enjoyed their love just as a boy and a girl and then just left it there.

Apart from David’s eccentric but loving Aunt Betsey Trotwood (who reminded me of Madame Yepanchin in Dostoevsky’s The Idiot), the other strong female in the book is Agnes, she’s very placid and wise, but even she has difficulty dealing with the devious villian of the novel Uriah Heep who slithers his way into the family business and eventually the family home.  Dickens describes him as a thin pale man, with ginger hair and no eyebrows to speak of who is snake-like in his movements and demeanour.  I expected him to have a negative influence over David’s life; however this is not the case.  He casts his poison over Agnes and her father instead and his true nature is exposed by Mr Micawber, whom Heep employs, believing him to be as corrupt as himself.

Now Mr Micawber is a strange character, and I was married to someone like him once.  He never pays his debts and is always waiting for an opportunity to ‘turn up’.  I didn’t like this character particularly (not because it brought back bad memories!) but because of his long convoluted speeches and letters - they annoyed me immensely.  However, he does seem to be a popular Dickens character giving rise to some well known quotations, and after all he is the one who exposes the devious Heep for what he really is, because despite the trail of debt Micawber is actually an honest man.


The strange thing about the novel is that David is barely ever called by his correct name, being called by many nicknames (Daisy), pet names (Doady) and also taking on his Aunts surname of Trotwood, it is like by writing his 'autobiography' David is setting the record straight that this boy, young man and eventually father, was actually called David Copperfield.

David Copperfield is quite an easy read in comparison to Bleak House, being a linear narrative, and there is a lot that you can identify with as we all grow up and fall in love.  If you have never read Dickens don’t let the size of the novels or the convoluted language put you off.  He doesn’t take long to draw you in, and takes you on a wonderful journey with his characters that leaves you sad to say goodbye once you have finished.
Posted by Maxine at 6:33 PM

Email ThisBlogThis!Share to TwitterShare to FacebookShare to Pinterest
Labels: 1001, Classics