I’m back safe and sound after a horror trip west of .  The trip was to run in the new car and I christened it well and truly - it’s a wonder I still have any suspension left and that my tyre’s weren’t shredded - the roads were atrocious.  Do Australians know how to build roads?  I have a new respect for our truckies who have to use the , it’s a disgrace, loaded with pot holes and in the rain (which we’re getting plenty of this summer unfortunately) there's water all over the road.  I’ve never felt so stressed in  my life than when driving to Chinchilla and back from Toowoomba. 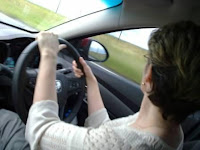 Then, to top it off, the day that we left Toowoomba to head back to the Coast we got stuck in a convoy of trucks, waiting for the road that heads down the range to re-open thanks to a landslide, and our other road out was under water thanks to the flooding.  I’m so happy to be back home in familiar territory and on fairly decent roads. But, I’m not happy about the stone chip on my bonnet thanks to a truck racing past me on the way home.  I’ve only had the car a week!
I didn’t do any reading whilst I was away, but I did take my Kindle and browsed the Kindle Store for a whole evening and downloaded twenty or so books and collections ready for this years 25 reads from the 1001 list.  Thanks Tanya, I really enjoyed spending my voucher!
Today, though, I read another short horror story which I really enjoyed.  It was called Green Fingers by R C Cook.  Basically it is about a widow who is surprised to find that whatever she plants in her garden grows without too much trouble; even clippings of hot house plants take over and grow amazingly just planted in the ground.  The widow is very pleased with herself and believes that she must have ‘green fingers’.  One day after eating rabbit she throws a bone out into the garden, but when tidying up the garden one days she sees that it has taken root, it is pulsating and has started to grow fur.  She finds this a little alarming to say the least, but she feels herself compelled to grow other strange things, like hair and a piece of wood that grows into a tree.  When the ‘rabbit’ plant disappears from her garden with what looks like paw prints in the snow, she decides that it would be best to go back to growing normal plants and to tidy up the jungle growth that has taken over.  The garden, however, has other ideas and she starts to experience various accidents culminating in losing a finger whilst trying to chop down the tree. On returning from hospital the widow finds her finger and against her better judgment she plants it…..
Honestly this was written in a light hearted manner but the sinister undertones were creepy and had me thinking that maybe she had murdered her husband and that the ground was bewitched like in Stephen King’s Pet Cemetary.  But, it wasn’t like that; it was just a disturbing story of an innocent elderly lady who keeps a clean house and has ‘green fingers’. And what a nasty little ending it has – very much of the bodysnatcher variety.   I think this one will stay with me for a little while J
Anyway, I bought a mobile wifi device today, so going to have a play with that now... so until next time......
Posted by Maxine at 9:23 PM